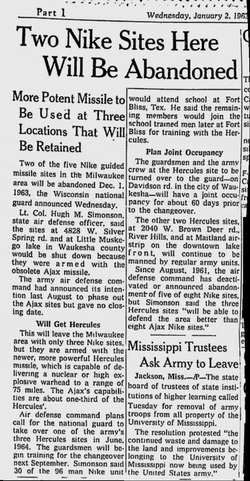 From the January 2, 1963 edition of the Milwaukee Journal

At this point, two of the five remaining Nike sites were still equipped with the outdated Ajax missile. Both of the Ajax sites -- one located on Silver Spring Road, the other at Little Muskego Lake -- were to be closed by the end of 1963.

January 2, 1963
Two Nike Sites Here Will Be Abandoned
More Potent Missile to Be Used at Three Locations That Will Be Retained

Two of the five Nike guided missile sites in the Milwaukee area will be abandoned Dec. 1, 1963, the Wisconsin national guard announced Wednesday.

Lt. Col. Hugh M. Simonson, state air defense officer, said the sites at 4828 W. Silver Spring rd. and at Little Muskego lake in Waukesha county would be shut down because they were armed with the obsolete Ajax missile.

The army air defense command had announced its intention last August to phase out the Ajax sites but gave no closing date.

Will Get Hercules
This will leave the Milwaukee area with only three Nike sites, but they are armed with the newer, more powerful Hercules missile, which is capable of delivering a nuclear or high explosive warhead to a range of 75 miles. The Ajax’s capabilities are about on-third of the Hercules’.

Air defense command plans call for the national guard to take over on of the army’s three Hercules sites in June, 1964. The guardsmen will begin training for the changeover next September. Simonson said 30 of the 96 man Nike unit would attend school at Fort Bliss, Tex. He said the remaining members would join the school trained men later at Fort Bliss for training with the Hercules.

Plan Joint Occupancy
The Guardsmen and the army crew at the Hercules site to be turned over to the guard—on Davidson rd. in the city of Waukesha—will have a joint occupancy for about 60 days prior to the changeover.

The other two Hercules sites, at 2040 W. Brown Deer rd., River Hills, and at Maitland air-strip on the downtown lake front, will continue to be manned by regular army units.

Since August, 1961, the air defense command has deactivated or announced abandonment of five of the eight Nike sites, but Simonson said the three Hercules sites “will be able to defend the area better than eight Ajax Nike sites.”