Phaseout of Nikes Reflects US Needs 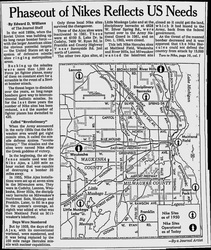 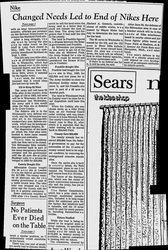 This article appeared in the Milwaukee Journal approximately two weeks after the Army announced that the three remaining Nike missile sites in Wisconsin would be shut down. The article does a nice job of covering Nike's history in Wisconsin. There is even a map of the still-active and former Nike sites that formed a ring around the Milwaukee area.

A scan of the two-page article is shown above; the text of the article is below.
Milwaukee Journal
March 17, 1971

Phaseout of Nikes Reflects US Needs
By Edward D. Williams
of the Journal Staff

In the mid 1950s, when the Soviet Union was building up its long range bomber force—with the larger American cities the obvious potential targets—the United States set up a system of defensive missile sites ringing metropolitan areas.

Backing up the missiles were more than 1,500 Air Force jet fighter planes, many of them on constant alert for a scramble in the event of a Soviet bomber attack.

The threat began to diminish over the years, as long range bombers gave way to intercontinental ballistic missiles. So for the last three years the number of Nike sites has been reduced, and the number of fighter planes has dwindled to 420.

Called “Revolutionary”
When the Army announced in the early 1950s that the Milwaukee area would get eight missile sites, it called the missile defense system “revolutionary.” The missiles and the sites were named Nike after the Greek goddess of victory.

In the beginning, the air defense missile used was the Nike Ajax, a 1,000 mile an hour rocket that was capable of destroying a bomber 35 miles away.

In 1955, Nike Ajax installations were set up at seven sites in the Milwaukee area. They were in Cudahy, Lannon, Waukesha, River Hills, the disciplinary barracks on Milwaukee’s Northwest Side, Muskego and Franklin. Later, to fill in a gap in the system’s coverage, an eighth was added at what was then Maitland Field on Milwaukee’s lakefront.

Days Were Numbered
But by 1959, the days of the Ajax, with its conventional warhead, were numbered, and it was being replaced by the 100 mile range Hercules missile with nuclear capabilities.

Three of the Ajax sites were inactivated in 1961. These were at 6100 S. Lake Dr. in Cudahy, 7400 W. Ryan Rd. in Franklin and County Highway Y near Sunnyside Rd. just north of Lannon.

The other two Ajax sites, at Little Muskego Lake and at the disciplinary barracks at 4828 W. Silver Spring Rd., were turned over to the Army National Guard in 1961, and on Dec. 1 1963, were closed.

This left Nike Hercules sites at Maitland Field, Waukesha and River Hills, but Milwaukee wanted the lakefront site closed so it could get the land, which it had leased to the Army, back from the federal government.

As the threat of the manned bomber decreased and it was apparent that the Nike Hercules could not defend the country from attack by 15,000 mile an hour intercontinental missiles, officials put pressure on the Defense Department to release the Maitland Field site.

After a long struggle, the city won by having the site and its radar tower on the bluff in Lake Park closed in May, 1969.

This left only two Nike sites, one at S7-W22187 Davidson Rd. in Waukesha, which had been turned over to the Army National Guard, and the other at 2000 W. Brown Deer Rd., River Hills, which is manned by the regular Army.

Last week, the army announced that it would close the last two by June 30.

US to Keep 52 Sites
The army still will have 52 Nike sites in the country, from a high of 134 in 1963, but none will be in Wisconsin. In its announcement last Wednesday, the Army said it also would close the Nike site at Roberts in St. Croix County.

The disposition of the lands on which the Nike sites were located in some cases caused disputes and confusion.

There were no problems with the first two to be closed. The Milwaukee Nike installation reverted back to part of the Army disciplinary barracks complex and the government sold the 45 acre site at Little Muskego Lake to a private developer in 1965 for $49,500.

County Bought Site
Milwaukee County bought the 24 acre site at London from the federal government for $17,000. The county wanted an alternate site for the county government in case of a bomb attack here. The idea later was dropped and two years ago the county sold the site to a general contractor.

Some confusion resulted in 1968 after the County Board voted to sell the land when the Army said in a letter that it could not release the land at that time. The Army had forgotten that it had sold the site to the county.

The land in Franklin figured in a dispute between the federal government and Franklin.

As Milwaukee put pressure on the Army to get rid of the Nike site on Maitland Field, the Army looked for a site to which it could be moved and considered the former Nike site in Franklin.

Franklin Bought Site
Franklin had bought the 13.6 acre site in May, 1965, for $22,500 and had plans for it. The Army decided to close the Maitland facility rather than move it, and the Franklin site now is part of a 68 acre industrial park.

The land in Warnimont Park in Cudahy won’t be clear for final disposition until later this year.

County Gets $50,000
The county already has received $50,000 from the federal government to pay for the restoration of the 12 acres of county owned land to it original condition by removing the underground concrete missile silos.

Once the entire site is back in county hands, the Park Commission plans to use it to expand the Warnimont Park golf course from 9 to 18 holes.

The future of the Maitland site, which was the center of much controversy between the city and the Army, has yet to be determined.

The Harbor Commission, which has prior claim to it through established jurisdiction, included it in long range plans for additional piers for the harbor. But lakefront land is valuable, and the 10 acres could be used for many purposes, including Summerfest activities.

Future Studied
While the land is being restored to its original state at Army expense, as specified in the lease to the Army by the county and for which up to $170,000 in federal money is available, a special committee is looking into its future.

The committee, chaired by Herbert A. Goetsch, commissioner of public works, was named by Mayor Maier last July to determine the best use for the land.

The 60 acres in Waukesha is owned by the US, and the 102 acres in River Hills include leased and Army owned land. Once the sites are closed down, the land will be offered first to other federal agencies, an Army spokesman said.

If there is no federal use for it, it will be sold, he said.

After June 30, the defense of the Milwaukee area in case of a bomber will be in the hands of the Nike missilemen based in nearby states and Air Force fighter pilots based at Truax Field at Madison, at K.I. Sawyer Air Force base near Marquette, Mich., and other bases.

The area’s defense in the event of a missile attack will still depend on the development of an adequate antiballistic missile system.