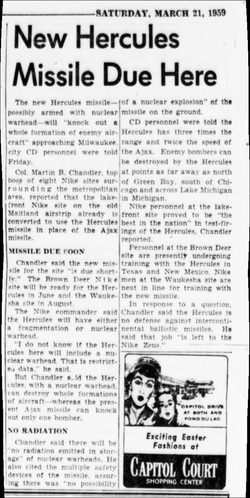 From the March 21, 1959 edition of the Milwaukee Sentinel

The text of the article is below.
The Milwaukee Sentinel
March 21, 1959
New Hercules Missile Due Here

Col. Martin B. Chandler, top boss of eight Nike sites surrounding the metropolitan area, reported that the lakefront Nike site on the old Maitland airstrip already is converted to use the Hercules missile in place of the Ajax missile.

Missile Due Soon
Chandler said the new missile for the site “is due shortly.” The Brown Deer Nike site will be ready for the Hercules in June and the Waukesha site in August.

The Nike commander said the Hercules will have either a fragmentation or nuclear warhead.

“I do not know if the Hercules here will include a nuclear warhead. That is restricted data,” he said.

But Chandler said the Hercules with a nuclear warhead can destroy whole formations of aircraft—whereas the present Ajax missile can knock out only one bomber.

No Radiation
Chandler said there will be “no radiation emitted in storage” of nuclear warheads. He also cited the multiple safety devices of the missile, assuring there was “no possibility of a nuclear explosion” of the missile on the ground.

CD personnel were told the Hercules has three times the range and twice the speed of the Ajax. Enemy bombers can be destroyed by the Hercules at points as far away as north of Green Bay, south of Chicago and across Lake Michigan in Michigan.

Nike personnel at the lakefront site proved to be “the best in the nation” in the test-firings of the Hercules, Chandler reported.

In response to a question, Chandler said the Hercules is no defense against intercontinental ballistic missiles. He said that job “is left to the Nike Zeus.”