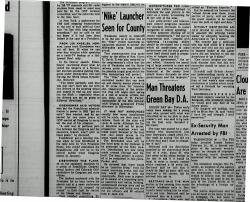 Article as it appeared on the front page of the October 9, 1954 edition of the Waukesha Freeman. The text of the article is below.
Waukesha Daily Freeman
October 9, 1954

‘Nike’ Launcher Seen for County
Waukesha county is expected to be the site of at least one of the “Nike” rocket launching installations planned to protect the Milwaukee area from possible attack.

The announcement was made today by the office of Rep. Glenn R. Davis. It was also reported by the congressman’s office that the city of Waukesha and the Butler railway yards are considered in the possible target area which the Nike installations will protect.

The "Nike” device is a radar-controlled rocket that can seek out and destroy enemy planes up to 35 miles from the launcher site. Construction of the protective ring will begin next spring at a cost of several million dollars, Brig. Gen. T.W. Parker, commander of the 45th anti-air-craft brigade announced Friday afternoon in Milwaukee.

It was not announced exactly how many installations will be made, nor their exact location. Each of the sites will cover 44 acres. Although the final locations will not be secret, prospective locations were not made public because of the fear that real estate prices in the areas would rise, Parker said.

The Milwaukee area will be the third area in the midwest to be protected by the Nike rockets. Installations are now being made around Chicago and Detroit. The local project is expected to be completed in two years, Parker said.

He stressed that there would be no “practice firing” from the rocket launching areas, and that they would blend in with the countryside. Each area is expected to consist of a launching area, an assembly and testing building, underground storage area and an administrative and living area for the six officers and 88 enlisted men at each site.