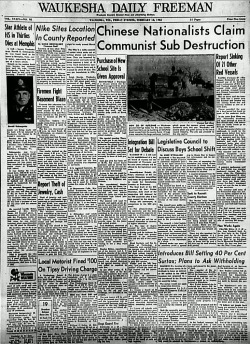 Photo at left is a microfilm of the front page of the February 18, 1955 edition of the Waukesha Daily Freeman. The Nike article (second article on top) notes locations of Nike sites in Waukesha county. Article text is below.

Location of two other Nike rocket sites near Muskego and Menomonee Falls was reported today after property owners said the government recently surveyed and made soil tests on their land.

A Freeman article earlier this month described the general location of a Nike site just east of Waukesha city on the Broadway road.

Army officials in Milwaukee have continued to offer no comment on the exact location of the three Nike sites until property is purchased. An official said an announcement might be ready around March 1.

The Nike is a radio controlled rocket which seeks out attacking planes and destroys them. They are launched by rocket power and each installation requires a total of 40 acres. Each installation operates on a 24-hour basis and is manned by about 90 men. The cost per installation is $700,000.

Ralph Martin, Waukesha route 6, whose farm is located on Hy. HH about eight miles northeast of Big Bend, said the government questioned the possibility of buying about six acres of his land. He said a survey of the land in question has been made and soil tests taken.

The piece of land sought is at the north end of Little Muskego lake. At the same time, the government has tested and surveyed about 18 acres of land adjoining the Martin farm and owned by the Thiesenhusen brothers, Edward, Arthur and Rudolph.

This land runs into the Martin property and is located on Hy. HH (formerly called the Waukesha – Racine road now called Martin drive). Edward Thiesenhusen said the government discussed the land with him last fall but he has not seen a representative of the army since then.

At the same time, Henry Graser, Menomonee Falls, who owns land about one mile west of the Martin and Thiesenhusen properties in the town of Muskego, said he was approached by the government on sale of his farm.

This plot is also located on Hy. H and is about one mile west of Little Muskego lake. Graser would not say how much property was requested or surveyed.

It is assumed however, the army would want about another 16 acres from the Graser farm. The installation is set up in such a way that the firing site is at one location and the control unit at another site, but it must be located within five miles of the firing site.

At Menomonee Falls, Mrs. Elmer Rasmussen said the government has run a survey and soil tests on their 25-acre farm but no further word on sale of land was reported.

The Rasmussen farm is located on Hy. Y at the Sunnyside road, about two and a half miles west of Menomonee Falls and one mile north of Lannon.

A Milwaukee real estate agent, B.B. Brown, admitted he has worked with the government in attempting to obtain two pieces of land in the town of Menomonee.

Brown said, however, he was not free to say where the land is located. He would neither confirm nor deny that the Rasmussen farm was one of the sites under negotiation.

He said he understood, however, that one sale was to be closed today and that he was waiting to hear from H.W. Thielander, civilian appraiser with the real estate branch of the corps of engineers in Chicago.