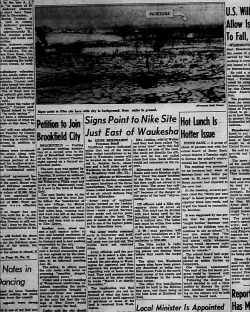 Unofficial reports indicated today that one of the three Nike rocket installations to be built in Waukesha county will be located on the former David L. Jenkins farm, about one and a half miles east of Waukesha on the north side of the Broadway road (Hy. D).

Army officials at Milwaukee continued to decline comment on exact locations of the three installations. The sites would house rocket launchers as part of an air attack defense ring around Milwaukee.

Army corp of engineer trucks worked on the Jenkins farm this October for about a three-week-period. Surveys were made and survey posts still stand on the land. The plot is about 30 acres in size and is one of the highest points in the immediate area.

The army trucks returned early in December and drilling of holes for purposes of soil tests was carried out. The trucks have not returned since.

Army officials said the procedure is to select a site, survey it and make soil tests, submit the plot plans to Washington for approval and then approach the property owner regarding sale or lease of the land. They said announcement of location of the sites would be made “March 1 or shortly thereafter.”

The implication was that property owners are not informed of what the tests or surveys are for until approval of purchase or lease of the land is received from Washington.

In this instance, the Jenkins farm is held in a trust controlled by the Waukesha National bank. Jenkins died about a year and a half ago and his will set up the trust with income from the land to go to a brother, Walter C. Jenkins, 234 W. College ave.

Mrs. Jenkins, wife of Walter said they had been called “by an army man” early this fall in regard to sale of the land. She could not identify the official and he has not called since that time. Bank officials would not comment on the report.

Milwaukee civil defense officials said here Monday night they know the exact location of the Nike site in this area but they could not reveal it at this time. The army has called this information “classified” because of the danger of the price of the land “skyrocketing.”

CD officers said a Nike site requires about 40 acres all told. This total can be divided with part being used for the launching site and the other for a control site. The latter unit must be within five miles of the launching site.

The Nike rocket is radio controlled to seek out attacking planes and destroy them before they reach the target area.

The other two Waukesha county sites have been generally described as being near Menomonee Falls in the northwest corner of the county and near Muskego in the southwest corner.

The other five installations would be built in the Milwaukee area, one of them being on the lake front at Maitland air field.