When it comes to defunct logos, most Milwaukee Brewers fans long for the ball-in-glove version. However there are a few who favor the team's very first logo - Barrel Man. Barrel Man was replaced by the ball-in-glove after the 1977 season and appeared to be all but forgotten. But close to 30 years after his demise, there has been a resurgence of interest. This became more evident 2008, when the Brewers had a Barrel Man bobbing head doll giveaway promotion for one of its games.

He's half man, half beer keg. He swings a mean bat, and if you get thirsty there's a tapper protruding from the back of his head.

He's Barrel Man, an apt symbol of baseball in Milwaukee. And he's older than he looks.

Paul Tenpenny, who for months has been researching the origin of the image, found him featured first in a cartoon from the Milwaukee Sentinel in 1901, a time when excitement was building about the city landing the American Association league Brewers for the coming season.

The caption is: "Brewers to Detroit - You just wait till my 'pitchers' get to 'working.' " The cartoon shows Detroit players tapping beer from the Brewers' Barrel Man into pitchers and drinking themselves into loopiness. This particular Barrel Man has the tapper in, um, the front.

"When I showed people the 1901 one, they said it's almost not decent enough to print, considering where they have the spigot coming out," Tenpenny laughed.

With the new baseball season about to start, Tenpenny has written an article on Barrel Man, filled with photos, that will run soon on mearsonline.com, the Web site of Memorabilia Evaluation and Research Services for sports collectors.

A Milwaukeean and a county retiree, Tenpenny, 56, works part time for the site. He's a longtime baseball fan with fond memories of walking with his dad to County Stadium for games.

Over the years, the Barrel Man has become a familiar, if no longer heavily used, image connected with our major league Brewers.

"Most fans, including myself, had no idea that his history predated the current Milwaukee Brewer team. A closer look back in history shows us where he came from," Tenpenny writes in the article.

Despite a few newspaper cartoons from early in the 20th century, Tenpenny couldn't find evidence that the mascot was used officially by the minor league Brewers until the 1940s. He discovered that the Milwaukee Journal at that time credited Rudie Schaffer, Brewers general manager, with creating the Barrel Man and rolling him out in 1942 at Borchert Field at 7th and Chambers streets.

The character's name then was the very German Owgust, which was pronounced and sometimes spelled as Awgoost, Tenpenny said.

Owgust - batting (righty and lefty), fielding and even sliding into base - graced the covers of many scorecards and programs and was on the players' warm-up jackets. Later in the 1940s, there was a younger barrel kid, which probably wouldn't fly today unless it was a root beer barrel.

In 1953, Milwaukee landed the big-league Braves from Boston. The suddenly irrelevant Barrel Man went on hiatus until the Braves left town for Atlanta after the 1965 season.

But the half-human keg hadn't gone away. In 1970, baseball returned to Milwaukee, and guess who came along.

"We chose the Brewers name and the Barrel Man because of my great and very fond memories of the AAA Milwaukee Brewers," Tenpenny quotes former Brewers owner Bud Selig as saying.

The Owgust name was dropped, but Selig's batting version of the Barrel Man was virtually identical to one used on the cover of a 1947 program of the minor-league Brewers.

The modern-day Brewers made the Barrel Man an official logo and slapped him on programs, pennants, seat cushions, pins, you name it. Last summer, the team featured the character on a bobble head.

In 1999, for one game billed as "Turn Ahead the Clock," the Brewers ironically wore the old Barrel Man on their chests on some funky-looking jerseys. As far as Tenpenny could find, this was the only time the character made it onto the players' shirts. He plans to ask the team to consider adding him to the team uniform.

When I raised the issue, Tenpenny said he didn't think it would be seen as an objectionable drinking image. "We're called the Brewers, so it's sort of like we have it out there anyway. The name is there, and we don't brew tea."

The Barrel Man was used less after the 1978 season. Bernie Brewer gets top billing now, but Barrel Man still lurks at Miller Park.

"We have a good amount of Barrel Man products on order, and it should be in very soon," said Brewers spokesman Tyler Barnes. They include shirts, caps and plush Barrel Man toys.

It's a cask of characters that tie baseball in Milwaukee to its glorious past. 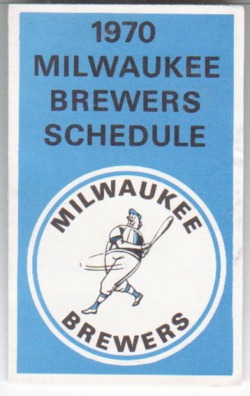 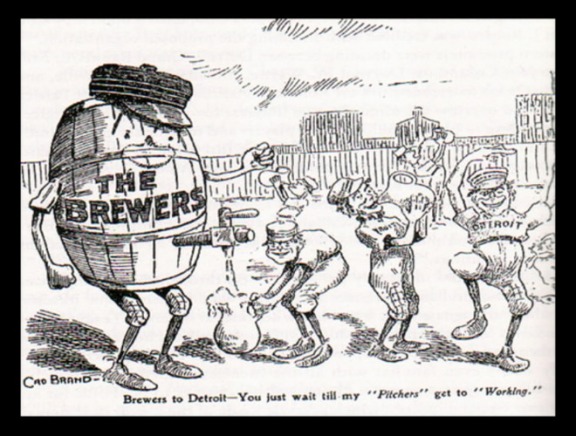 Barrel Man was featured in a cartoon from the Milwaukee Sentinel in 1901, as excitement was building about the city landing the American Association league Brewers for the coming season. The caption is: “Brewers to Detroit — You just wait till my pitchers get to working.” The cartoon shows Detroit players tapping beer from the Brewers’ Barrel Man and drinking themselves silly. 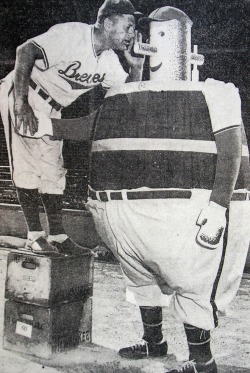 Charlie Grimm poses with Barrel Man in 1942. At the time Barrel Man went by the name 'Owgust' — pronounced Awgoost. 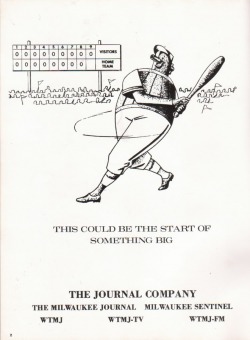 Barrel Man appears on the inside cover of a 1947 program with the slogan: “This could be the start of something big.”

The end of the Barrel Man era

The Milwaukee Brewers decided to ditch the Barrel Man logo after the 1977 season. 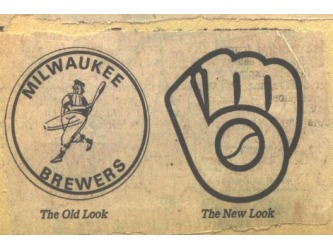 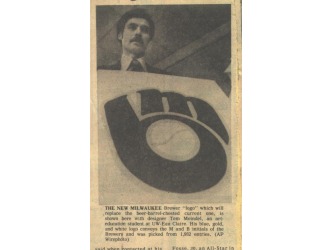 Both of the above newspaper clippings are from the January 1, 1978 edition of the Sheboygan Press. Click on the clippings to enlarge. 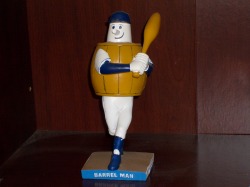 About 25 - 30 years or so after he left the scene, a nostalgia was brewing for the Barrel Man logo. He was featured as a bobbing head doll giveaway for one of the Milwaukee Brewers home games in 2008.