Research taken almost exclusively from the archives of the Milwaukee Journal, the Milwaukee Sentinel, and the Waukesha Daily Freeman
The birth of the Nike Missile took place during World War II. Its purpose was to protect urban areas from enemy bomber attack during the Cold War.

About Nike Missile Bases of the Milwaukee Area

During the Cold War, Nike missile bases formed a “ring” around major U.S. cities. In most cases, each base was located on two separate parcels of land – one being the control center, the other the launcher area. The Nike missile's purpose was to protect urban areas from enemy bomber attack.

Eight Nike missile bases appeared on the Milwaukee landscape in 1956. Initially, all eight bases carried the Nike Ajax missile. In 1959, three of the eight Milwaukee Nike bases were converted to the more-advanced Nike Hercules missile. The other five bases remained armed with the Ajax and were all closed by 1963. In June 1971, the Army shut down the remaining three Hercules-armed bases, ending Nike's stay in the Milwaukee area.

M-02 Milwaukee: Control center and launch area were both in River Hills, Brown Deer Rd. This is one of the three sites that were converted from Nike Ajax to Nike Hercules.

M-20 Milwaukee: Along the lakefront. Control center has been obliterated; launch area is now the Summerfest grounds. This is one of the three sites that were converted from Nike Ajax to Nike Hercules. According to the book Rings of Supersonic Steel, this base, along with the other two Hercules bases, was closed in 1971. But according to news articles found in the Milwaukee Journal, the base was closed in 1969.

M-42 Cudahy: The launch area is now a golf course; the control area is on private land. Base was closed August 1961.

M-54 Hales Corners/Paynesville: This base may have been located on one piece of land, which is now private property. Base was closed August 1961.

M-64 Muskego/Prospect: The control center is located on Martin Dr.; the launch area on Adrian Dr. Both are private property. Base was closed March 1963.

M-74 Waukesha: Control center is located off of Davidson Rd. and is now Hillcrest Park; launch area is on W. Cleveland Ave. and is now Missile Park, but is closed to the public. This is one of the three sites that were converted from Nike Ajax to Nike Hercules.

M-86 Lannon: Control center is located on Lannon Rd., in Menomonee Falls; launch area is on Menomonee Rd & Lannon Rd. Base was closed in August 1961. 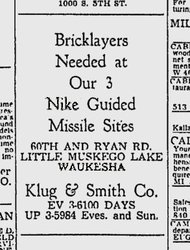 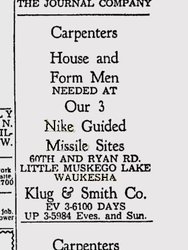